The Next Big Thing

So apparently there’s this fun writer’s game going around called “The Next Big Thing.” Or maybe it’s a writer/reader/blogger game. Or maybe it’s not a game? I’m not sure. I think I’ll call it a doohickey. There’s this cool doohickey in which I got tagged by the fabulous Adriana Paramo, author of Looking for Esperanza. I get to answer questions about my own book, and to tag five brilliant writer friends who I think are “The Next Big Thing.” Though in my more metaphorical book, these writers are ALREADY “Big Things,” if by that we mean they’re talented, generous, large-spirited people who have written books you absolutely must read.

What is the title of your book?

What the Mouth Was Made For. 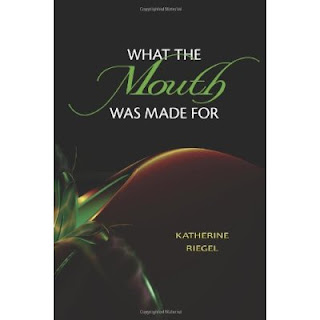 What is the one-sentence synopsis of your book?

Oh. This one is too hard. I’m going to just copy a sentence from the amazon.com description: “The poems in WHAT THE MOUTH WAS MADE FOR seek to fill up the spaces created by loss and desire with images of open fields, of green, of kisses.”


What genre does your book fall under?

Poetry.  (If I were more confident, I’d say “bad-ass-read-out-loud-to-whoever-you’re-with-at-that-moment poetry.”)

Where did the idea come from for the book?

I wrote a poem more than ten years ago about my first kiss. It was what I thought then was a double sestina—two sestinas using the same repeated end-words. The poem ultimately didn’t work, though I liked some of it very much. My favorite line was, “This is what the mouth was made for: apple, word, kiss.” I never could let go of that poem, partly because that boy lost his grandfather in a horrific house fire right around the time of that first kiss, and I remember looking at the terrible burn scar on his hand and wondering how someone could survive something like that. And yet we have to eat, and somehow find words for things, and there are those absolute miracles we call kisses. Anyway, my books of poetry (so far) aren’t “about” one particular thing—I write poems and then figure out how they go together—but these poems coalesced around loss and longing and sensuality, and I couldn’t resist the opportunity to revisit that poem.

How long did it take you to write the first draft of the manuscript?

For me, it was very quick! I wrote a ton of poems after my first book came out, just about one per week, because I had a wonderful poet friend, Michael Hettich, who basically demanded that we exchange poems that often. I admired his work so much, I couldn’t ever bring myself to email that I didn’t have anything to send. I also scooped up some poems that didn’t fit in the first book, which of course extends the time. But it came together in about two years.

Who or what inspired you to write this book?

Inspiration. Well, I write poems because I can’t not write them. I know that’s become a writer’s cliché, but it’s true. It’s not that writing is easy—it’s hard, because being vulnerable on the page is hard. In that way, a huge inspiration for me is my students and former students, writers who keep putting themselves on the page despite everything the culture is telling them. Reminding them that they matter—and their voices matter—buoys me enough that I sometimes believe I matter. Of course, I’m also kiss-obsessed, mouth-obsessed, as the book reveals. So anyone I’ve ever wanted to kiss definitely counts as inspiration!

Will your book be self-published or represented by an agency?

It’s published by FutureCycle Press, an independent press that’s taking advantage of new technologies, trying to connect readers with work that can move them. FutureCycle uses print-on-demand technology, so they don’t have to deal with book storage or “out of print” problems, and they make all their titles available on Kindle as well. Unlike many poetry presses, it’s not affiliated with a university. I’m happy to be with them, because they make the process fun (I get to help pick out the cover art) and, most important, they took a chance on me, publishing my first book. I had been sending out some version of a first poetry book for 18 years by the time Castaway was published. I’m still not sure this second book is real.


What other works would you compare this book to within your genre?

Not an easy question! All comparisons to the poetry of other poets I love seem self-aggrandizing, because those poets are so very talented. How about I just list some poets I love instead? James Wright, Nin Andrews, Tim Seibles, Ellen Bass, James Galvin, Laura Kasischke, Terrance Hayes, Judith Barrington…


What actors would you choose to play the part of your characters in a movie rendition?

I got the sweetest compliment from two women in two very different circumstances: both compared me to Anne Hathaway. So I suppose that’s who would play me. As for the various men I kiss or imagine kissing: it’s got to be Colin Firth. I know, the ages are wrong for those two, but he’s my biggest, longest-standing celebrity crush. I even had a poem with his name in the title in my first book.


What else about your book might pique the reader’s interest?

Love, sex, kisses. What more do you want?
Posted by Katie Riegel at 1:08 PM